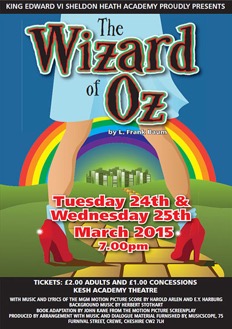 Thanks for bearing with us while we took the Easter break off – we return to you refreshed and full of chocolate. The marvellous Spencer Organ, one of our Certified Educators, is a teacher at King Edward VI Sheldon Heath Academy ( KESH Academy to its friends) in Birmingham. The school recently put on a student performance of The Wizard of Oz