There’s a lot of spooky Pi shenanigans going on this Halloween. Here at Pi Towers, our very own Rachel Rayns is trialling the first run of the Raspberry Pi Digital Creatives Bronze award we plan to be running formally from 2015. (More of that in a later post.) Amy and Dan Mather are acting as our guinea pigs for this trial; and here are the (orange, approximately spherical) fruits of their first day’s labour. I’ll be prodding the Mather kids for a write-up on how to rotoscope your own face onto a pumpkin soon

The good people at Adafruit pointed us at this video. Besides the fact that the costume is driven by a Raspberry Pi, we don’t know much about the build (or the guy who made it – he goes by MikeHandidate on YouTube, but we suspect that’s not actually his name) – good though, isn’t it? More Halloween goodies to come tomorrow. Are you using a Pi in your costume or house decorations this year?

You may remember our Education team attended PyConUK in Coventry last month. We ran the Education Track, which involved giving workshops to teachers and running a Raspberry Jam day for kids at the weekend. We also gave talks on the main developer track of the conference. Carrie Anne gave a fantastic keynote entitled  Miss Adventures in Raspberry Pi wherein she spoke of her journey through teaching the new computing curriculum with Raspberry Pi, attending PyConUK the last two years, being hired by the Foundation, and everything she’s done in her role as Education Pioneer 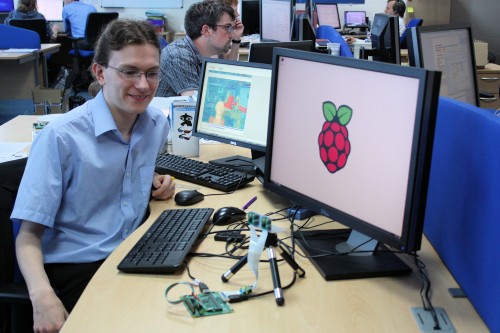 Liz: We’ve got a number of good friends at Argon Design , a tech consultancy in Cambridge. (James Adams, our Director of Hardware, used to work there; as did my friend from the time of Noah,  @eyebrowsofpower ; the disgustingly clever Peter de Rivaz, who wrote Penguins Puzzle , is an Argon employee; and Steve Barlow, who heads Argon up, used to run AlphaMosaic, which became Broadcom’s Cambridge arm, and employed several of the people who work at Pi Towers back in the day.) We gave the Argon team a Compute Module to play with this summer, and they set David Barker, one of their interns, to work with it. Here’s what he came up with: thanks David, and thanks Argon! This summer I spent 11 weeks interning at a local tech company called Argon Design, working with the new Raspberry Pi Compute Module

Firefox OS Launching For Raspberry Pi Mini PC In 2015 Geeky Gadgets (blog) During MozFest 2014 Held in London over the weekend Mozilla unveiled its Fire OS plans to release a downloadable or flashable version of the Fire operating system for makers and developers to load onto their Raspberry Pi computers. The Fire OS is

Firefox OS Comes To Raspberry Pi iProgrammer Firefox OS hasn't taken over the world yet despite its promise.

Mozilla to make Firefox OS a tasty filling for a Raspberry Pi Inquirer A Firefox logo MOZILLA HAS REVEALED plans for a version of Firefox OS specifically for the Raspberry Pi .