Several people have mentioned the idea of using the Pi to help relatives and carers support older people in their own homes by monitoring aspects of their daily routine as well as things like the indoor temperature, but until now, we hadn’t seen anyone write up a system they’d implemented. So we were very interested when we received an email from Jamie Grant, telling us how he had used a Raspberry Pi-based home monitoring system to help him support his late mother in maintaining her independence. 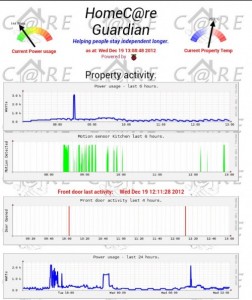